People at that time used plants in many ways that we would have never thought of nowadays. This was a time when there was no electricity, no synthetic chemical substances and no place you could buy what you needed. People had to take advantage of whatever could be found in nature in the most creative way.

Houses were made of stone and the floor was just compressed soil. The floor was swept with brooms made from cypress branches, heather, thyme or myrtle.

Shrubby kidney vetch, Anthyllis hermanniae or frokali as it is called in Corfu was the most popular plant to make brooms.

The dishes were cleaned with fern or fig leaves, ash from the hearth or sage.

Big barrels were washed with large quantities of thyme decoction. Dry thyme branches were used as a strainer in wine making. My mother in law, Eleni Vorou, described the process to clean the barrels as follows:

“In a big pot we had 4-5 quinces, many quince leaves, lemon tree leaves and lemon peel, thyme, the little twigs from the grapes, fennel and water to cover. We boiled everything well and poured 2-3 of these pots in the barrel. We left it in there for four days. From time to time, we rolled the barrel so that the tea would clean it well.”

The above is the process in a Kefalonian village, an island very close to Corfu. My assumption is thyme decoction was used similarly in Corfu.

“We used to put pebbles, hot water and ash in the barrels to clean them.” (Kerkira Kalogeropoulou, Corfu)

Barrels and other utensils containing oil or fats were cleaned with butterbur, Petasites hybridus leaves.

“My husband cleaned barrels containing grease with the butterbur leaves from the river. He rubbed the barrel with the leaves and plenty of water and a soapy foam was formed.” (Dimitra Nalbanti)

“Wild mint, olive oil soap and hot water were used to clean the cheese-making pots. My family believed that cleaning the pot and the cheese cloth by rubbing well with this herb placed on the olive oil soap bar and hot water was very important for making cheese that wouldn’t develop mold or would be in any other way spoiled. The cheese we made could be preserved long-term and was never spoiled as happened to other people I knew” (Maria Faita)

Aggeliki Vasilaki remembers that when she was young, in the village of Perithea where she was brought up, she and other women harvested Spanish broom stems and then dipped them in the sea in order to ret (i.e. soften) them. Then, they tore the stems and removed the fiber from inside. They let it dry, processed it like wool (carded and spun it) and wove with it on the loom.

All over Corfu, flax was cultivated to be used for weaving. Flax was water retted. In some places it was retted in the sea and in other places in big rock pools filled with rain water. The stems were fermented there – the smell was hard to bear. Then, it was broken, scotched and hackled. After that, it could be spun.

Agave fiber was used as thread for sewing and as yarn to weave in the loom. It was also used to make rope, bags to carry or store things and paper to wrap things in. Mary Mina remembers that her grandfather used to make strings for his violin with agave fibers.

The mature leaves were boiled and while still warm, they were peeled. What was left was the core with the fiber embedded in it. This was boiled again, stirring continuously so that the fiber would be separated from the core. The fiber was washed with plenty of cold water and left to dry under the sun. When dried, it was washed again in warm soapy water to make it shine. This yarn was woven in the loom or used in embroidery.

The plants that were going to be used for fiber were not allowed to bloom because that made the fiber weaker. The leaves contain a sap that can cause severe rashes and the fiber was not touched with bare hands before boiling and washing well.

In Kefalonia, the pointed edges of the agave leaves were used to punch holes in a piece of cloth to make the traditional embroidering technique called kofto. With this technique, women decorated the white bed linen, pillow cases and tablecloths usually woven from flax fiber. White cloth embroidered with this technique was also used in several church ceremonies. This is a technique commonly used in all Greek islands, Corfu included.

My mother in law, Eleni Vorou, described to me how her sister used to make sandals with agave fiber during the war.

“My sister took the fiber from the old agave leaves, the ones that had already turned yellow. She wove braids with it and tied them together to make the bottom of the sandals. She sewed onto the sole the braids that would fasten the sandal onto our feet. These were the only shoes we could have at that time.”

Clothes were dyed with walnut leaves, especially when someone had passed away and the female relatives of the specific person had to dye all clothes black. They placed the leaves in a pot and simmered them for about an hour. They strained the liquid, added the fabric and soaked it for many hours. They didn’t have a color fixative. The whole process was repeated when colors faded from washing.

Red color was died with a powder bought from travelling vendors and I haven’t found anyone so far who knows how it was made.

Katerina Fakiola showed me the Echium plantagineum flowers and remembered that her grandmother used to harvest this plant on the mountain to dye purple fabrics.

Nikos Vasilakis from the Ropa Valley remembers that fishermen used pine bark to dye the fishing nets brown. They used pieces of bark that had fallen from the tree and could be found lying around it. They powdered it and boiled it for many hours. The fishing nets were then soaked in the decoction. 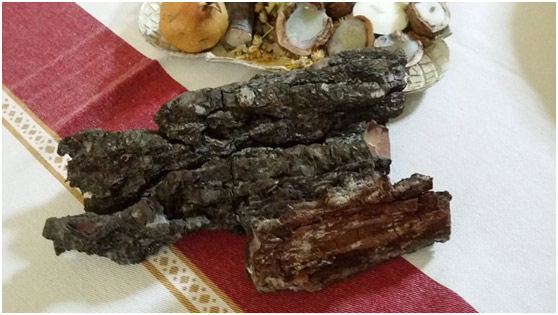 From medieval times till the 19th century, the acorns and cups of the valonia oak, Quercus macrolepis were collected in Corfu and exported. They were used in tanning and dyeing. Before olive cultivation, oak acorns together with the galls from the kermes oak, Quercus coccifera were the major products of Corfu.

However, that was too long ago and so far, I have never met anyone who remembers the use of galls or acorns in dyeing.

For washing clothes, the women boiled water with ash from the hearth and myrtle or laurel leaves. They strained the decoction through a big cloth and washed the clothes with it. Dried laurel leaves were spread in the drawers among the clothes as an insect repellent.

Other uses of plants in everyday life I have come across are as follows:

“We harvested the resin from the almond tree and kept it in glass bottles. We used a feather to apply it wherever we wanted to use it as a glue.” (Spiros Balis)

Ink was made by pressing olives, from the pokeweed fruit or from the oak galls.

Baskets were woven from the young shoots of olive trees and from reeds. 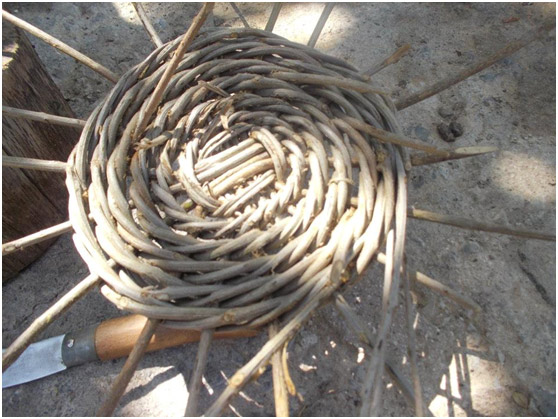 Fern leaves were beautifully arranged in the baskets used to preserve or carry fruit, especially the small aromatic strawberries cultivated in Corfu.

Corfu has plenty of wetlands, rivers, lakes and small ponds. People living close by used to make small boats made from rushes, Juncus subulatus growing in the area for fishing and transportation. A boat like this was called papirela (παπυρέλα). A papirela boat can be seen in the folk museum of Sinarades, “Nikos Paktitis”.