2. Focus of the Study and Research Methods

Five years ago, while I was waiting outside the community doctor’s office with my father-in-law, who came to live with us after a big earthquake in our home island of Kefalonia destroyed their house, I had the chance to spend a few hours with the elderly villagers who were also waiting to see the local doctor. Out of nowhere, they started talking about a plant that, when used to rinse their mouth when they had a tooth ache, helped get rid of the bad tooth soon after. The tooth just fell out after a while and that was a great relief since there was no dentist they could pay a visit to. The herb was called by its local name, which was absolutely unknown to me. But that was the moment I decided to start writing down the traditional use of plants in Corfu.

It wasn’t an easy task! I don’t come from Corfu and I don’t have any elderly relatives here to ask. It took some time before things started to fall into place. It was then that I realized that I had to earn my right of passage into people’s memories and that lifelong devotion is required. Things take shape slowly over time, information unfolds and it gains meaning following my own change of knowledge, attitude, understanding, community sharing and community building. This is knowledge that people tend to protect and they don’t share freely. It is a great moment when it happens. Sometimes local people respond to my request and other times they come looking for me because they have things they would like to share.

My aim is to bring together the information and write it down, so that it will be always freely available to anyone looking for it. Since I started this work, I have often been invited into schools all over the island to speak with the children about the traditional use of plants in Corfu and I am always happy to respond positively to these invitations.

At the beginning, it was only about medicinal plants. I started writing the stories down trying to find the plant behind the local name, trying to find out what is common and consistent in most stories and what is in agreement with western herbalism. What I am really looking for is if behind the medicinal uses of the plants, a consistent herbal healing tradition and a system of strategies and ideas can be traced. Unfortunately, this hasn’t been possible so far.

Most of the herbal uses people shared with me belong to what is called “domestic medicine”. This is a term I first met in Stephany Hoffelt’s article “Domestic Medicine” (Plant Healer Magazine, Vol. V#III, summer 2015) and really helped me to organize my thoughts around the information I am gathering.

“Domestic Medicine is a term coined by Dr. William Buchan to describe autonomous self-care practices that occur in the home. Anthropologists sometimes define this as the popular health care culture. Popular health care refers to self-care or familial care practices informed by popular knowledge. Often knowledge of this nature is passed along by word-of-mouth – frequently as home remedies that are passed down through the generations.”

This aspect of herbal medicine can possibly be found in the writings of the few herbal healers that lived in Corfu three generations ago and their work represents what Hoffelt describes as “folk herbalism”, in which:

So far, I have come across two names. Both of them were farmers who served their communities with their skills. They never asked to be paid for their services, although people always felt the need to give back from what they had available.

Konstantinos Soupionis was a famous herbalist who lived in the south of Corfu in the village of Kato Garounas. People still speak of his amazing treatments and it is generally claimed that after he started practicing, the number of people with disabilities was drastically reduced in the south. It was quite common for local midwives to hurt the fragile baby’s musculoskeletal system when things didn’t proceed absolutely smoothly and he was the one that brought everything back into place after birth.

People used to call him Kouzinas which means “Kitchen Man”, which probably has to do with making medicine in the kitchen. He was the only person I know of so far that used to make salves, and since jars were not readily available at that time he poured the salves into nutshells instead and kept them wrapped in lemon or nut tree leaves 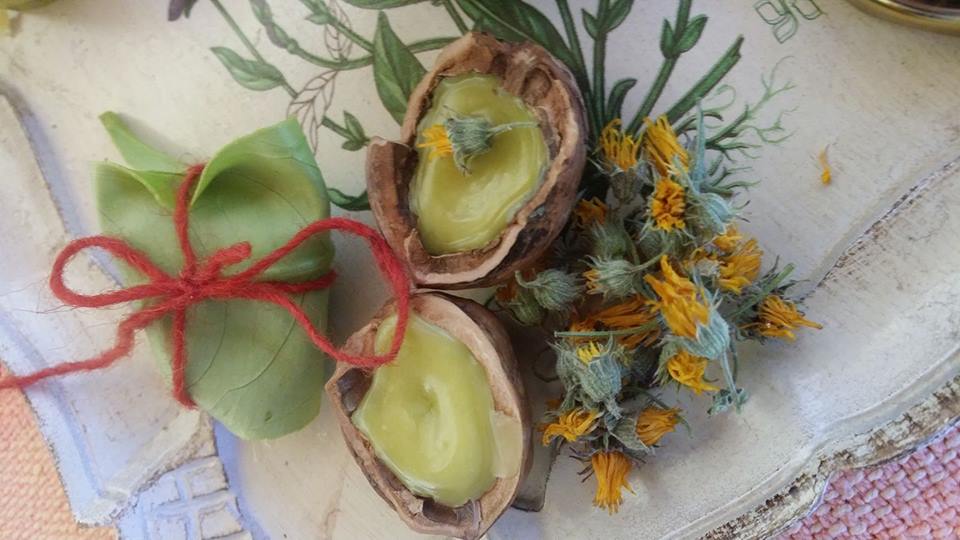 Unlike most people in his time, he knew how to read and write. He had herbal books and used to write down his cases, healing protocols and recipes with ink he made himself by pressing olive oils or pokeweed fruits. Some of these writings have been collected by the University of Patras and some others are kept by his grandchildren. Unfortunately, no herbalist has ever seen them.

It is absolutely certain that he somehow assessed personal constitution and gave different treatments to different people for what is considered the same ailment in Western medicine.

He started practicing after he was released from prison, where he had been serving a sentence for political reasons in Ioannina, in the mainland. Ioannina is very close to Zagoria, a number of villages on the mountain of Pindos, famous for their traditional herbal medicine and the great number of herbs growing in the area. My guess is that he met one of the local healers (Vikogiatros – a medicine man from Vikos Gorge area) in prison and he learned from him. This is just an assumption for the moment.

Some time ago, I heard of another great herbalist who lived in the north, in the village of Pagoi, more or less at the same time as Kouzinas. His name was Xenophontas Lomis and he also used to write down his cases, healing protocols and recipes. His grandchildren claim this material is lost but nobody knows for sure. His son was a well-known herbalist too.

There is still much to be learned about these two men. Maybe in the future, maybe for someone else. The important thing is that an herbalist with a broad knowledge of different herbal healing systems will try to find the main ideas that drove their work. I am sure that it will happen when the time is right.

The third term that I will acknowledge from Stephany Hoffelt’s work is the term “professional care”. The term refers to doctors, and here we have the case of Masigka, the female doctor on the island of Paxos. Masigka was the third female doctor in Greece and although she could have had a great career in Athens or abroad, she returned to the island of Paxos to serve her community. She was the only doctor on the island from 1924 to 1968 and she had to rely on herbs since there was no other medicine available most of the time.

She used to teach people, especially the women, how to prepare herbal medicine for their families. Possibly, she also learned herbal remedies and recipes from her patients.

Sophia Kontari, a young lady who was brought up on the island remembers a bottle of marshmallow syrup for coughs that was on the kitchen table during the winter which her mother had learned how to make from Masigka.

According to Sophia: “My mother used to crush and grind marshmallow stems and leaves in the mortar for half an hour, till she had a good mucilaginous paste. She added some water to cover the paste and boiled it on a low heat for many hours (2-3 hours) until well reduced. She strained well, added some sugar to the liquid and boiled it again till she had a syrup. She kept the bottle on the table and gave us tablespoons when we had a cough. She learned that recipe from Masigka, our doctor.”

This is the only syrup recipe I have found so far that produces a real syrup (not a thick tea), which can be preserved.

Unfortunately, the people that provide written information about Masigka’s life are doctors who were not interesting in finding out more about the way she used herbs. There are still some of her patients alive and it is absolutely necessary that information should be gathered from what they still remember, as most of them are quite old.

The information on the use of healing plants at home that I have managed to gather so far is grouped into the following categories:

For other uses of plants which came up in the interviews and attracted my interest, the information about them runs as follows:

The majority of the information has been gathered by interviewing the locals, and many of these interviews, especially the most recent ones, were recorded and transcribed. Recordings started as a means of preserving people’s words in the local dialect, something that unfortunately cannot be transmitted to a non-Greek reader.

Interviews were not structured. People could freely share what came to mind – whatever they wished. They were encouraged to speak about what was significant to them and this freedom occasionally revealed new areas of interest and topics that hadn’t come up thus far.

There were no questionnaires or a checklist, just a loose framework to ensure all topics would be covered and that there would be flow in the conversation.

As more and more people that I didn’t know personally started sharing their stories, I tried to make clear at the beginning who I was and what the purpose of the work was. Fortunately this is a relatively small island, and even people that didn’t know me knew what it was all about before they decide to talk. I always asked if they wanted their name to be mentioned should I publicly use the information they gave me, and reassured them that all information would be handled with respect. There were no formal procedures, as something like this would be considered strange for our small community.

Most of this information is not available in any book or other written source since it is the first time that is has been researched and organized into a full text. All photos accompanying the text are mine, if not otherwise stated.

Plant species are cross checked with the checklist of indigenous and naturalized vascular plants occurring on the Ionian Islands made by the scientific team of the Institute of Botany from the University of Vienna. The checklist can be found online in the Flora Ionica Project Page: