4.A Colds and Flu

Garlic has always been the main means to prevent illness. Women traditionally incorporated large amounts of garlic in everyday food to keep their loved ones safe and well.

At the first sign of illness, an infused oil for massaging the body was the first thing to be made. All the people I have talked with remember that – usually their grandmother – would put a briki (a small metal pot used to make coffee) on a low flame and would infuse chamomile flowers or the fruits of the eucalyptus in olive oil. Most people remember the eucalyptus fruit being called koumbia, which means buttons. 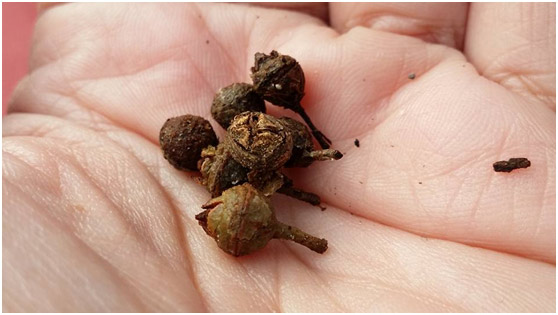 Everyone knew when someone was ill because the eucalyptus infused oil had a strong distinctive smell that would travel across the whole neighborhood.

Women massaged this oil all over the patient’s body, just before going to bed. It seems love was an important ingredient in this treatment, which most people enjoyed deeply, in spite of their illness.

Maria Faita remembers that her grandmother massaged her with eucalyptus oil on the neck, the shoulders, the back, the hands, the legs and every joint of her body. The eucalyptus essential oils helped the patient breathe freely and sleep calmly during the night. The next morning the cold was usually gone.

The warm herbs strained from the oil were wrapped in a piece of old bed linen and were kept around the neck. This practice was called stoupata. Slightly warm ash from the hearth was also used like this. Socks made at home from sheep’s wool were filled with warm ash and kept around the neck, on the chest or any part of the body that was in pain.

Herbal plasters with flax seed or mustard seed were also applied on the chest or the back to ease a cough and help expectorate phlegm. Maria Faita told me that she was strictly taught not to apply plasters on both the chest and the back, because this trapped the phlegm in the lungs and could easily lead to bronchitis or pneumonia.

Maria described the procedure to make plasters with mustard seed as below:

According to Maria, the adults used to boil the leaves of the mustard plant, Sinapis alba and drink the broth with red wine added to alleviate a cold.

Even Masigka, the doctor in Paxos, had to spend all the evenings of the long days that she traveled all around the island on a donkey to visit patients, grinding flax and mustard seed for the following day’s plasters.

Flax was cultivated in Corfu to make cloth but also to be used for plasters. People I have talked with in other Ionian islands remember that their mothers weaved pieces of woolen cloth to be used specifically as flax seed plasters.

Warm rubbing alcohol could also be used to rub on the chest or the back. This is a practice that is still alive today in most villages. The bottle containing the alcohol was placed in a pan with warm water until the wanted temperature was obtained.

Syrups were made to help with cough and congestion. Maria Faita remembers her grandmother making syrup for the colds. In a briki she placed equal quantities of chopped dried jujube, dried raisins and dried figs. She added a cinnamon stick and covered everything with double the amount of water. She boiled it over a medium flame until the liquid was reduced by half. She strained and added honey. For the adults, she also added brandy. A spoonful of the syrup was taken several times during the day and especially in the evening and after waking up in the morning when symptoms aggravated.

The basic ingredients for the above recipe came from nature and the garden. This was extremely important at that time, as they had to rely on what was free or cheap and easily available.

Flaxseed syrup is another example from a grandmother living in Corfu town:

“As cough syrup, my mother-in-law boiled flaxseed… Not too long because it becomes very thick. When ready, she removed it from the flame and added honey and lemon… and she used this like a syrup.” (Eleni Zoumbou)

Joy Konstantis shared with me another syrup recipe that she learned from her Corfiot mother-in-law in the village of Vistonas.

She had a leaf of rustyback, a leaf of navelwort, some sage, rosemary and mint in a large (4 Greek coffee cup) briki. The briki was filled with water and a spoonful of sugar was added. Everything was boiled till well reduced. The syrup had a clear ruby red color when ready. She left it to cool and gave half a small ouzo glass to each child before bed.

Rustyback, Asplenium ceterach, is a fern species growing on stone walls and rocky soils. It is traditionally used to treat coughs. It is also a diuretic used for urinary tract infections. It is widely known for breaking down stones in the kidneys and helping to pass them out of the body. It is a bitter herb with an affinity for the lungs, the spleen and the kidneys. This herb is known as skorpidi in Corfu. The word means the herb that breaks the stones.

Navelwort, Umbilicus rupestris has taken its name from the navel like leaves. It grows on walls, in crevices or tree cavities. It is also used as a poultice for burns, injuries and inflamed skin problems. It is a soothing demulcent herb. The local name is petrokafki.

The persons that shared these recipes with me can’t distinguish between the different types of cough and they have no idea if the person they learned the recipe from could. They probably could but they never shared this knowledge with them as they were children at that time or they typically developed the same kind of cough for which the specific syrup worked well.

Several aromatic antimicrobial herbs were taken liberally as tea to relieve cold symptoms. Sage, Salvia fruticosa and oregano, Origanum vulgare were the most popular. Mallow, Malva sylvestris was made into tea to relieve a sore throat and a dry cough. Calamintha, Calamintha nepeta was the plant most commonly used as tea for colds on Paxos island.

European centaury, Centaurium erythraea, which is also known as feverwort, was used as a tea to treat high persistent fever. It is a very bitter plant in the gentianaceae family, which was used instead of quinine in the treatment of malaria. Malaria was quite common in old rural Corfu due to the many wetlands all over the island. European centaury is an excellent herb to be included in bitter digestive formulas. The tea made from the flowers was also used as a wash to strengthen the hair.

The most common treatment for high fever was compresses dipped in a pot with vinegar diluted in water and applied on the forehead and the wrists.

Warm oil was dropped in the ears for ear aches. The oil was usually taken from the vigil lamp, where it was always kept warm from the little flame burning inside.

Drops of mother’s milk were used to cure ear infections and relieve earache. Breastfeeding mothers were always willing to provide this valuable treatment whenever there was a need for it.

Warm donkey milk calmed down a persistent cough, especially whooping cough. Natasa Chalikiopoulou from the village of Xoroepiskopoi told me the following:

“My father told me that when they had whooping cough as kids, their parents brought crabs from the river. They cooked them over the fire, took the flesh, powdered it and diluted the powder in water. They gave it them to drink to relieve coughing.”

The crab species living in the rivers of Corfu is the Potamon fluviatile.

Diarrhea as a symptom of stomach flu was addressed with blackberry leaf tea, tea made from the leaves of the plant called Christ’s thorn, Paliurus spina-christi, or tea made from the peel and white internal membranes of pomegranates.

Cupping with or without scarification was very popular and almost all women and many men were trained by the family elders on how to do it.

These were all simple cures with things that were easily available but, according to local people, highly effective.
Last but not least, at the very first sign of illness people used to drink what is known all over Greece as rakomelo. Rakomelo works miracles with colds and it is a warming drink to have during winter time.

Eugenia Vitouladiti remembers her grandmother making the rakomelo to treat a sore throat. In a briki, she warmed half a Greek coffee cup (let’s say, a quarter of a cooking cup) of raki (distilled grape spirit) with a teaspoon of honey. She removed it from the heat when it started foaming and added 4 drops of lemon juice and a sprinkle of thyme.

To make a bottle of rakomelo to have beforehand for treatment, or simply for pleasure, we can carefully warm 1 liter raki or tsipouro (another potent Greek spirit) with 6 tablespoons of good quality local honey (2 tablespoons of honey for every cup of raki). Thyme honey is usually used in Greece. Caution must be taken when we have alcohol near a naked flame because it can ignite. Two cinnamon sticks and 1 tablespoon of cloves can be added, if we like. Stir with a spoon till the honey is fully incorporated into the alcohol and the alcohol starts boiling. Remove from the heat and add one tablespoon of an aromatic antimicrobial herb – thyme or dittany are great options. Let it infuse covered for half an hour. Strain and bottle. Serve at room temperature or warm.