The most common plant used for wound healing in first aid situations was Inula viscosa. The scientific name has recently changed to Dittrichia viscosa but all over Corfu this plant is known as krouzia.

Inula is a weed in Corfu growing in all cultivated areas and so this plant was always close by when people had accidents while working long hours in the fields. The leaves were crushed and used as a poultice on cuts, wounds and insect bites.

The sticky leaves were famous for their use as toilet paper when kids had an upset stomach after eating too many figs, mulberries or koumara (the fruit of the strawberry tree), as Eleni Armeni remembers. Spyridoula Avloniti has told me that the leaves are still spread on top of potatoes to preserve them year round. The leaves contain essential oils with insect repelling properties.

Inula was also a famous remedy for hemorrhoids. The leaves were mostly used as a poultice. Mary Varsaki told me an interesting story she heard from her aunt, in which inula was used as a bath:

“My aunt suffered from hemorrhoids. Once, she went to the church and she didn’t sit during the service because she couldn’t. In a confidential talk with the priest, who asked the reason she had to stand for hours, he advised her to boil plenty of inula leaves, strain the tea into a big pot and sit in there for as long as she could. She claims that the problem disappeared afterwards.”

Garlic was also used on wounds for its antimicrobial properties. Something else used as an antimicrobial powder was ground cuttlebone, which can easily be found in most beaches. 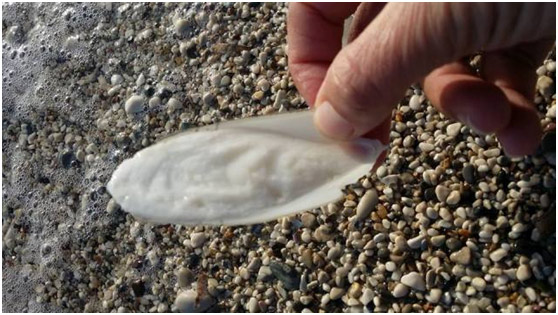 “We powdered the cuttlebone and used it as an antiseptic powder for the wounds of our sheep and goats.” (Maria Faita)

In other parts of Greece, people used the powdered cuttlebone in similar ways. They even rubbed it on to the teeth and gums for relevant problems. Cuttlefish ink, bone, flesh and eggs have been used since antiquity for many health issues.

An old man from a village called Gianades once sent me some leaves from a plant they used on wounds, especially infected wounds with pus. He called this plant threftohorto which means the plant that “nourishes” the wound to heal it. I happily identified the plant as wood betony, Stachys germanica, one of my most beloved plants.

Nitsa Dafni, a lady from Corfu town, shared with me the following story:

“When I was 4 years old (74 years ago), I had a bad accident as I was running. My leg was injured and the wound was swollen and inflamed. My mother took me to the doctor and he said I should have surgery. On the way to town, my mother met an old man she knew and told him the story. He tried to convince her to avoid the surgery because he didn’t trust the doctor. My godmother told my mother about this herb. She cooked it in olive oil, strained it and applied the warm olive oil on my leg. After ten days, I woke up one night and the whole bed was covered by the pus that had come out of the wound. After that, I was much better. My mother applied walnut leaf poultices on the wound until it was completely cured.

When I was 11, I had another accident while playing in a river. My leg was swollen again and my mother was very worried. She infused the same plant in olive oil and applied it again to my leg. Soon, my leg was completely healed’

Nitsa couldn’t remember the name of the plant but she said that she knew where to find it. It was once very common in the old town, growing between the stones of the pavements. She brought me the plant which was identified as epazote, Dysphania ambrosoides by Christian Gilli, botanist at the University of Vienna.

Spiros Metallinos has shared with me that his family used to keep in a drawer a puffball mushroom to use for burns. The spores in the puffball mushroom, Lycoperdon pyriforme, resemble ground coffee and modern scientific research has shown that they have strong antimicrobial properties. Shepherds in the mainland always carried this mushroom in their knapsack to use on wounds for themselves or their animals. The mushroom was opened when there was a need. Otherwise, it was replaced every season. Other people have shared with me that the spores were mixed with olive oil to make a simple salve. Recently, I was told by Sia Banou from Klimatia village that the puffball spores are an excellent remedy for chilblains.

Fig milk was the most common treatment for insect bites. It seems, however, that prevention was the most important means of protection since scorpions and other venomous insects were abundant in the old stone-made houses people used to live in and in the fields. Many of my friends remember their mother cooking scorpions or wasps in a cast iron pan over the fire till completely dried of all juices. The dried insects were turned into powder and were added in their morning tea. This powder was known as skourmo.

Every kid took skourmo once and the dosage was a whole scorpion cooked and powdered in the tea. The whole village was aware of which child had already taken the skourmo and who hadn’t because this altered the level of danger for each person, if beaten. People that had it as kids and were later stung by a scorpion report that it felt like “a wasp sting”.

Eleni Zoumbou remembers that her grandmother cooked the scorpion in olive oil and then, gave each child a tablespoon of this oil. The scorpion oil tablespoon was taken once in lifetime, similarly to skourmo.

Other people describe that the scorpion was added alive in a jar with olive oil and while dying, he released the poison into the oil. The oil was applied on scorpion bites and people swear it reduced the pain drastically.

In Corfu, there are three species of scorpions. Euscorpius corcyraeus (which is endemic to the island), Euscorpius italicus and the Mediterranean scorpion Mesobuthus gibbosus.

Snake skins were also powdered and then infused in oil over a medium heat to treat several skin problems. Skin problems, especially on the feet, were very common since people rarely wore shoes and went around barefoot. Many people have also shared with me that most people working as builders kept a snake skin in a drawer to infuse in olive oil in order to prevent tetanus from accidents at work. This oil was applied on the wound when they had accidents with dirty old metal tools and other items. It seems it was common practice, although I have no idea if it really worked. However, the fact that snakes were used for tetanus in traditional Chinese medicine must be something more than coincidence!

The navelwort, Umbilicus rupestris, in juice or poultice form, was also used to treat various skin problems, especially the ones involving inflammation.

Dental issues are a nightmare for people with no access to the dentist. Unfortunately, I experienced that in our days with refugees and illegal immigrants. People will definitely try to get rid of a tooth that causes problems if there is no permanent help available. Ouzo mouth washes will numb the pain for a while but help will be needed at some point. Most people in Corfu remember their grandparents using hellebore, Helleborus cyclophyllous, known as skarfi, for decaying teeth. In the past, people would rinse their mouth with hellebore root tea and after a while the problematic tooth would simply fall out. Some people say that this tea will destroy most of the teeth if used quite often and some others say that only the ones with a problem would be affected. Hellebore is a very toxic plant and the tea was never swallowed.

Fractures were treated by specialized healers who had usually learned this healing art from their parents. Healers touched the wounded area with their fingers to feel what had happened to the bones and, comparing both sides of the body, aligned the bones before immobilization. Then, the broken extremity was secured in place with a poultice made of grated olive oil soap, ouzo and an egg white. The poultice was wrapped around the leg or the hand and allowed to harden. If further immobilization was needed, canes would be tied on top. Ten days later, they would break the plaster, wash the extremity with grated olive oil soap in warm water and then would massage with olive oil. If they were happy with the result, they would advise the patient to continue washing and massaging the area for ten more days. If the bone wasn’t completely healed, a new plaster would be applied.

The above description was given to me by Maria Faita who lived close by to a healer and enjoyed as a child spending time with her and watching what she was doing. That was pretty easy since all treatments happened on the road, outside the healer’s home.

The results of these therapies depended on the experience and the skillfulness of the healer. It seems that most healers, at least the ones that were known all over the island were very talented and all the people I have met that were treated by them were completely cured with no side effects.

Sprains and strains were easier to deal with at home. Elder was the herb most commonly used.

“There is a lady in the village that once had a very bad strain. The ankle was really inflamed and she couldn’t walk. An old man that used to be a teacher told her to make a poultice with elder leaves and the soft branches. She kept the poultice on during the night and the next day her ankle was absolutely fine. She was very much impressed and tells this story to everyone since then.” (Agathi Sirioti Karavidi)

Another recipe is the following:

“For strains and sprains, my grandmother would infuse days-old bread in red wine. She boiled the mixture till the wine was reduced by half. Then, she took the bread out, pressed well to remove the wine and added oregano. She made a poultice and spread that on a piece of cloth. She applied the poultice to the damaged area and she said that by the next day it was completely healed.” (Eleni Zoumbou)